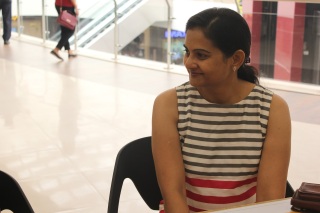 Mrs. Pooja Agarwal beams with pride as she sits across the table from her favourite learner Nihal Chaudhary. They reminisce about their Teach India experience and laugh about the light-hearted banter that Nihal had often initiated in class. Nihal is now a dedicated Guest Relations Associate at PVR Cineplex and owes his success to his teacher who left an indelible imprint on him, enabling him to take charge of his life by providing him with the skills he needed to succeed. He says in crisp English “I like to communicate with people in English now. I want to go and talk to new people every day. I’m very proud of myself.”

On a quest to find completeness in her life, Mrs. Agarwal decided to enrol as a volunteer for Teach India. Little did she know, that her efforts would radically alter the course of many lives, such as Nihal’s. Of course, in the first few days of her volunteer training, she had inhibitions. She confesses “I was not sure how I would mingle with the students. This was my first time doing something like this.” However, by the first day of the class, Mrs. Agarwal was already making great strides as a teacher. Nihal fondly affirms this by remembering a pneumonic game that she introduced to the class that day. Gradually, she became extremely adept at her role and it took her relatively less time to prepare lectures for the next day. Things began to work for her in perfect synchronisation. In fact, she had reached the point where she would often conjure up impromptu assignments and activities for the class, much to the delight of the learners.

During our discussion, Mrs. Agarwal also put forth an important point about student dropouts. Despite nationwide efforts to eradicate illiteracy, there are still a large number of students who drop out of school due to ignorance or societal and economic pressures. “While most learners stayed dedicated to the course throughout, there were some who dropped out due to opposition from home, or maybe due to lack of motivation. There is an imperative need to change this.”
Fortunately, in Nihal’s case, as his parents saw his progress, they too became supportive of his education and career. We, at Teach India feel privileged to have laid the foundations for the employability and growth of students like Nihal. But there is always an eternal need for more and more educators to come forward and reshape the future of our nation’s youth. (Volunteer for Teach India now at http://ww.itimes.com/teach-india?pref=delhi)

Mrs. Agarwal is an example of a Teach India volunteer who transcends the boundaries of a conventional educator to act as a facilitator of knowledge, a constant motivator, and most importantly, a life coach for her students. She has been very vocal about the need for Nihal to pursue his education further while still balancing that with his job. And the best part is, thanks to her efforts, Nihal does both effortlessly.

She can’t wait to volunteer for another session!